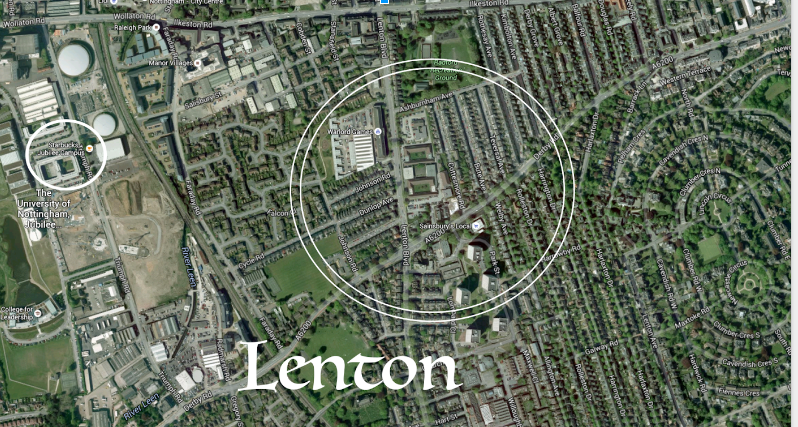 There is an old legend amongst Lenton inhabitants. It tells the story of a ferocious battle that was once fought between the Britons and the Romans across the fields of what was then Old Lenton. There is little archaeological evidence to support this; an old Roman coin depicting Constantine II here, another showing the reign of Tacitus there, but speak to any of the older inhabitants in the area and they will all nod knowingly and sagely inform you that this is all quite correct.

I was actually surprised as to just how comprehensive and detailed a history Lenton had in Bygone times. Key figures such as Count Tallard, the Archbishop of York and even William the Conqueror all populate the tales of this once small parish. Rich in Saxon and Medieval history, the modern day Lenton is fast becoming one of the most highly sought after and prestigious locations for student accommodation for the University of Nottingham.

Location is undeniably one of the main reasons for this. The border for the main campus of the University of Nottingham is an easy ten minute stroll from Lenton, allowing students to avoid being too dependent on public transport as well as the luxury of going back home in between lectures, an option that is not viable for those student accommodations located further afield. A recent student University survey suggested that only 17% of students would even consider a location that required 40 minutes plus of travel time and 58% of all students said that 30 minutes was the absolute cut off point. It appears therefore, that Nottingham University students very much follow this trend when considering their accommodation and it is the reason why locations in places such as Lenton Boulevard are in such high demand.

The other main driving factor that is making Lenton so popular amongst Nottingham University students is the quality of the accommodation. We are witnessing a new generation of students who, more and more, are looking to break away from the stereotypical view that student accommodation must be run down and neglected, and instead looking to spend the latter years of their degree in as premium and high end housing as possible. In fact we are finding that students are generally more happy to spend a little extra in rent in return for a higher quality of living. Lenton is the epitome of this view with houses like Bute Avenue, although at the higher price range for Nottingham Uni student accommodation, proving to be some of the most highly sought after in Nottingham with students recognising the worth of the added value.

Finally, Lenton offers more culturally accessible experiences than any other location for Nottingham University students. Both inside and just outside of Lenton, the breadth of options is prolific. You have the straightforward cinema and the concert hall on Theatre Square or an easy bus ride into the city centre. However alongside this you also have the more exotic alternatives. For example, just a twenty minute walk will lead you to Tigguo Cobauc, more commonly known as the City of Caves. These naturally forming sandstone caverns are steeped in history with references being found as far back as during the reign of Alfred the Great and are considered quite the landmark. There is even something called The Adrenalin Jungle where, perhaps unsurprisingly so close to somewhere called ‘Robin Hood Hills’, you can enjoy a day of archery and other outdoor activities.

Lenton therefore, for all its ancient historical heritage, appears to have established itself as one of the most modern and sought after locations for Nottingham University student accommodation. Whether it is for the location, value, attractions or a combination of all three it is at the forefront of what a modern day student both expects and desires.